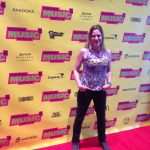 This past March and for over the last 10 years I have had the opportunity to reunite with old friends during the SXSW Festival in Austin, Texas.  Cara Pastore of F22 Studio and I have had the annual tradition of working side by side as photographer and live engineer.  Our geographic paths have paralleled with synchronicity while studying studio art abroad in Liverpool, graduating from University of Rhode Island, moving to different parts of Florida, splitting to Atlanta and Los Angeles, now storming a place for Cara in Los Angeles.

My first SX experiences were to work on Red River Avenue at the Mohawk during the day, Club Deville in the eve for two showcases in a row ( think 11:30AM call time and 4:30AM roll out ) for 5 consecutive days. Thank goodness this was always alongside some of my favorite people on the planet; the venue’s manager Will Rhodes, the backline company Travis Garaffa, and live sound engineers Chris Michaels, Mark Creegan, Ryan Rooney, and Kevin Raymond.

Since the closing of Club Deville at the end of 2013, I have spent most of my time at SX trying to find live acts and showcases that include exceptionally artistic visuals in their performances. Skye Ashbrook of Beat Imprint is the best person to discover these with in Austin TX.  We have been only the best of friends and comrades since meeting at AS220 in Providence Rhode Island. I had been their full-time live performance engineer, TV220 cable access co-producer and artist in residence for the later years of the 1990’s.  Upon first meeting Skye, I brought him out on the town to Fort Thunder for their annual Halloween Bash where I dressed up in the original lobster mascot costume from Rocky Point Palladium and Skye wore the perfect mad scientist’s jacket while carrying his laptop hard case chained to his wrist.  We have been collaborating artistically ever since !

No visit to Austin goes without a long waltz in the neighborhood playground.. Switched On.

This year I was able to test out the Arturia Drumbrute in person.  Peter and I were looking to add a new drum machine to the Dub Rig and for something that could replace either my old 909 or Linndrum ( both left behind in previous recording studio businesses when they eventually sold ).  Peter was also impressed by this machine’s positive review of both its analog and digital capabilities. I ‘ laughed out loud ‘ ( pretty much screamed jumping up and down ) when he decided to press the BUY button on the Drumbrute in the shopping cart on his phone.  This behavior was unnoticeable while we were in the audience with Scott the other night watching Kate Tempest together at the Echoplex.. a couple of weeks later the Drumbrute is waiting when we return from our epic cross-country roadtrip .. and then enters the Dub Rig …

Lastly not to forget our annual comb through Flatstock, a very dangerous place to walk through with a wad of live engineer’s cash .. What an amazing adventure as always, and brought back Peter the latest awesome from a few of my favorite artist booths, to include Cross Hair Chicago and Gallow.