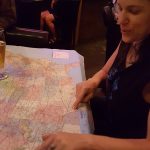 We had a van full of vintage recording studio equipment; we had to get from New England to Los Angeles. This was a serious mission (failure could be very expensive!) but we were determined to have some fun and exploration (including seeking out some proper breweries) along the way.

The itinerary was as follows: from New Hampshire to Connecticut to pick up a few more items (including Amy’s grandfather’s vintage kick drum). Then a big push to Nashville, and Dallas. Next up was Marfa, Texas where we planned to stay for a day or two. Finally, Santa Fe to Monument Valley and down to LA …

We hit the road on April 1st. First stop was for picking up the very important drum, and visiting Pizza J the Revival Brewery downstairs tasting room ..

We wanted to start off the road trip by putting some distance between us and New England. So we set our sights on Nashville, where we had a friend’s place to crash.

The city was founded in the early 1880s as a water stop. Today, Marfa is  a major center for Minimalist art (Wikipedia). It’s also a major center for pizza: it was absolutely necessary that our travel plans allowed for arrival before closing time at the Pizza Foundation.

We spent a day or so here at the Thunderbird …

One last “vacation day” with some impressive scenery 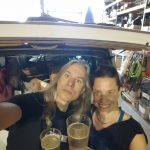 Back at the Brewery, pulling the van into the shop to unload … at Peter’s mother’s request, we recreated the “champagne toast”to celebrate the successful completion of the road trip …

When you're working on a rock opera, this sort of

On the road again through the California desert...

Scheming up some plans for the new TPM video over

Soon there will be nothing.

When you're working on a rock opera, this sort of influence could lead to trouble #coredarklabs @ Tampa, Florida https://t.co/TJWyezPiI8

h J R
Eating noodles (thank you @ramenhood) on the street in #dtla, here every day is Blade Runner #coredarklabs @ Los An… https://t.co/ocozauyZGW