What is a manifesto?

According to the Random House Dictionary of the English Language, a manifesto represents opinions, intentions, motives, or objectives.

Things we want to do (as opposed to things we’ve done, which are covered in the entries of this blog).

Why write a manifesto?

… there are a few practical reasons, at the very least …

So, this is an exercise: we’re going to write some of this stuff down – opinions, intentions, motives, objectives – in no particular order, and see where it goes … DISCLAIMER: what follows is a random collection of ideas – our own, as well as from sources who influence us. It’s not complete, nor very well organized, nor are we trying particularly hard to make any coherent arguments … consider this a perpetual working draft … but if you read on you may nonetheless get some idea of the sorts of things we think about, where we’re coming from, where we might be going …

When we think of a “manifesto,” we of course remember a number of notable artists from the early 20th century. They were poets, painters and musicians who were dissatisfied with the state of the (art, or larger) world, so they proposed a new way to do things, and then set a proper example by doing it themselves (or at least trying). Opinions, intentions, motives, and objectives, actively manifested.

“At the turn of the twentieth century, prophecy and vision were part of the intellectual scheme of things and manifestos were one of their fastest and most ubiquitous vehicles. Scattered from the top of St. Marks Campanile in Venice or handed out to Milanese factory workers as they came and went to work – manifestos were the confetti of a new marriage of ideas” – Richard Humphreys, Head of Interpretation and Education, Tate Britain, London July 2001

“WE DECLARE: That the name of ‘madman’ with which it is attempted to gag all innovators should be looked upon as a title of honor.” – Marinetti, Technical Manifesto, 1910

The Futurists were for the most part a bunch of arrogant Fascists, and some would argue that they weren’t particularly competent as artists (“I cannot free myself from the strange contradiction that I find their ideas, at least for the main part, brilliant, but I am in no doubt whatsoever as to the mediocrity of their works” said Franz Marc) But while the end results of their efforts may have been mixed, at least they tried: not just with words, but with action! And real innovation always involves risk and uncertainty. They unquestionably did have some important ideas that resonate and remain quite relevant today, expressed in a prodigious quantity of manifestos (one might overlook the “Futurist Manifesto of Men’s Clothing”). Their ideas ranged from the abstract to the specific (e.g., “WE FIGHT … Against the bituminous tints by which it is attempted to obtain the patina of time upon modern pictures.” ). And they certainly had a rather rock-and-roll attitude; everything they did involved an enthusiastic “fuck you” to the establishment:

“Away then with hired restorers of antiquated incrustations. Away with affected archaeologists with their chronic necrophilia! Down with the critics, those complacent pimps! Down with gouty academics and drunken, ignorant professors! … Make room for youth, for violence, for daring!” – Marinetti, Manifesto of the Futurist Painters, 1910 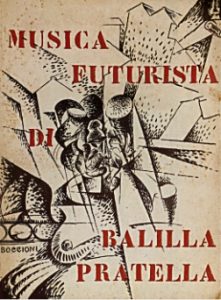 And this attitude applies to music as well:

“Some people are born old, slobbering spectres of the past, cryptograms swollen with poison. To them no words or ideas, but a single injunction: the end. I appeal … to those who are thirsty for the new, the actual, the lively. They follow me, faithful and fearless, along the roads of the future, gloriously preceded by my, by our, intrepid brothers, the Futurist poets and painters, beautiful with violence, daring with rebellion, and luminous with the animation of genius.” – Balilla Pratella, Manifesto of Futurist Musicians 1910

Indeed, the Futurists did not limit their explorations to one domain. In ideas, if not in actual practice, they addressed poetry, painting, sculpture, photography, architecture, theater and stage design, music, dance, cinema and more.

In some case this involved the development of new techniques and even new instruments to cross media boundaries:

” … after the entire theory had been minutely established, we decided to make a serious attempt to create a music of colors. We immediately began to think of the instruments, which perhaps did not exist, and which we would have to have made to order, to enable us to realize these theories. We traveled untrodden roads, letting intuition guide us for the most part, but always proceeding concurrently, in order not to be led astray, with our study of the physics of light and sound …” – Bruno Corra, Abstract Cinema—Chromatic Music 1912

“We will sing of great crowds excited by work, by pleasure, and by riot; we will sing of the multicolored, polyphonic tides of revolution in the modern capitals; we will sing of the vibrant nightly fervor of arsenals and shipyards blazing with violent electric moons; greedy railway stations that devour smoke-plumed serpents; factories hung on clouds by the crooked lines of their smoke; bridges that stride the rivers like giant gymnasts, flashing in the sun with a glitter of knives; adventurous steamers that sniff the horizon; deep-chested locomotives whose wheels paw the tracks like the hooves of enormous steel horses bridled by tubing; and the sleek flight of planes whose propellers chatter in the wind like banners and seem to cheer like an enthusiastic crowd.” – F.T. Marinetti, Manifesto of Futurism 1909

“For the Futurists the new technologies of flight, locomotion, radio, telephone, cinema, x-rays and radio provided the raw objective material of an art which aimed at re-inventing the categories of time and space, object and subject.”- Richard Humphreys, Head of Interpretation and Education, Tate Britain, London July 2001

The Art of Noise

Samples, field recordings, machine sounds … these are part of our daily fare – it’s easy to take them for granted. But the Futurists more-or-less invented the idea:

… MUSICAL EVOLUTION IS PARALLELED BY THE MULTIPLICATION OF MACHINES, which collaborate with man on every front. Not only in the roaring atmosphere of major cities, but in the country too, which until yesterday was totally silent, the machine today has created such a variety and rivalry of noises that pure sound, in its exiguity and monotony, no longer arouses any feeling.

To excite and exalt our sensibilities, music developed towards the most complex polyphony and the maximum variety, seeking the most complicated successions of dissonant chords and vaguely preparing the creation of musical noise. – Luigi Russolo, The Art of Noises (extracts), 1913

It’s also perhaps worth noting that “FUTURISM EXALTS THE VARIETY THEATRE … born, as we are from electricity, is lucky in having no tradition, no masters, no dogma … the authors, actors, and technicians of the Variety Theatre have only one reason for existing and triumphing: incessantly to invent new elements of astonishment.” (Marinetti 1913)

EVERYTHING OF ANY VALUE IS THEATRICAL.

The Power of Now

“Marinetti understood this built-in obsolescence of the ‘new’ and stressed a more fundamental idea. The word ‘future’ comes from the Latin futurus, the future participle of esse (to be). It is thus a word which had its roots in the dynamism of now and suggests the seeds of what is to be as lying in the field of the present. Futurism was … about the energy of present commitment and intuitive action …”” – Richard Humphreys, Head of Interpretation and Education, Tate Britain, London July 2001

André Breton lays it out in the Manifesto of Surrealism, 1924:

SURREALISM, n.  Psychic automatism in its pure state, by which one proposes to express – verbally, by means of the written word, or in any other manner – the actual functioning of thought. Dictated by thought, in the absence of any control exercised by reason, exempt from any aesthetic or moral concern.

“I believe in the pure Surrealist joy of the man who, forewarned that all others before him have failed, sets off from whatever point he chooses, along any other path save a reasonable one, and arrives wherever he can ….”

“Surrealism, such as I conceive of it, asserts our complete nonconformism clearly enough so that there can be no question of translating it, at the trial of the real world, as evidence for the defense.”

“Everything is valid when it come to obtaining the desired suddenness … it is even permissible to entitle POEM what we get from the most random assemblage … of scraps of headlines cut out of newspapers:”

next: The Coredark Manifesto, Part Two