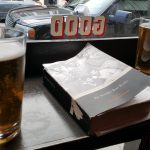 Maybe it would be worthwhile to say something about why we think Beat poets are interesting? Is there a way in which their philosophy intersects with aspects of our Manifesto? What better way to investigate these ideas and celebrate Beat culture than with a proper road trip? While the Beat scene is more often associated with the East Coast and New York City in particular, there is a strong California Beat history (it’s notable that Beat poetry readings began on the West Coast), so there are plenty of landmarks within driving distance … from downtown Los Angeles heading north to Morgan Hill, San Francisco, then east to Nevada City (we originally planned to cross the mountains to Truckee, but the pass was closed by snow). 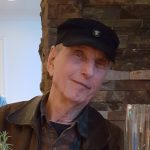 We were joined by our friend from the Brewery, the artist Theodore Svenningsen.  Having lived through the Beat era in North Beach, San Francisco, Theo was designated our leader, tour guide, and advisor on literary and philosophical matters for this adventure.

The relevance of the Beats

For years when I lived in Silver Lake, the following Kerouac quote (from On The Road) was scrawled on the wall over my desk and keyboard, so I would see it every day:

“… the only people for me are the mad ones, the ones who are mad to live, mad to talk, mad to be saved, desirous of everything at the same time, the ones who … burn, burn, burn like fabulous yellow roman candles exploding like spiders across the stars …”

I could relate to that, at the time (and still do). But from a broader perspective, why do we find the Beats compelling? For starters, whether or not you’re a fan of their literary style, their approach to artistic endeavor can be seen to have set the stage for some interesting and important goings-on in America. We- as artists – can’t help but be influenced by the music and art (and, in particular, the connections between the two) that was happening in the ’60s – but as Daniel Belgrad points out in The Culture of Spontaneity, a lot of this began with the Beats:

“The ‘beats’ helped to transform the late modernism of the avant-garde into the youth counterculture of the 1960s … [they] sought to develop literary  forms by which to communicate both experienced reality and the emotional energy that went with it … An avant-garde interest in exploring the dynamics and sensory dimensions of intersubjectivity led the beat writers to develop strong connections to bebop jazz.”

The Beats were proud of their “outsider” status, they refused to follow convention …

“… the beat writers developed a sensibility that regarded marginal status not as a failing but as an asset.”

… in a way this attitude toward the mainstream helped give the movement a name, and – more importantly – demanded the invention of new, alternative forms of expression. John Clellon Holmes describes,

“… a weariness with all the forms, all the conventions of the world … you might say we’re a beat generation”

“in the Beats, the two strands of … protest – one directed against the white-collar work world and the other against the suburbanized family life that work was supposed to support – come together in the first all-out critique of American consumer culture.” Barbara Ehrenreich

Their heroes were not traditional ones, and, more importantly (to us) crossed media boundaries. For example, Kerouac called Charlie Parker

“A great musician and a great creator of forms …”

We can’t help but note the Beat’s awareness of the importance of expressive sounds. Again, crossing lines between traditional media, and we perceive comparisons between our interest in musique concrete and industrial sounds and what the Beats were doing.

“Kerouac was approaching what is now known as ‘sound poetry,’ ‘text-sound,’ or ‘concrete writing’ in which the sound of a word, not its symbolism, communicates sense.”

Finally, in the age of laptop artists and “just press play” performers, we really appreciate the Beats’ emphasis on live, spontaneous action and its performance relationship with the audience …

“Beat poetry readings were unquestionably characterized by the absence of the traditional, imaginary ‘fourth wall’ separating the performers from the audience”

We knew of a few locations of historical importance – or, at least, approximate locations – that we wanted to hit. So we had some maps: 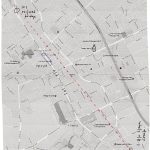 The first stop was Morgan Hill (via lunch in Solvang). As Theo described, Morgan Hill was the end of the train line, back in the day. When Jack Kerouac and Neil Cassady were working on the railroad, they would wind up in Morgan Hill and would proceed to sit under the railroad bridge and drink Port. We decided we would recreate this ritual: we had a bottle of Port at the ready, but we didn’t know exactly where the bridge was located. We identified two railroad bridges in Morgan Hill: one over a creek and the other over old highway 101. We checked out the first spot, but decided it wouldn’t have been the place. The Old Highway 101 bridge, however, seemed to fit the description, so this is where we passed around our bottle of port and drank to Jack and Neil.

While it is not of historical import to the Beat movement (as far as we know), Solvang seemed like a good place to take a break on our northward journey and join Mr. Svenningsen in a round of Danish Aquavit!

Theo lived in North Beach, San Francisco during the Beat heyday, so he had plenty of stories and could point out the essential landmarks – among the most important of course is City Lights Bookstore: an independent bookstore-publisher combination … founded in 1953 by poet Lawrence Ferlinghetti . Both the store and the publishers became widely known following the obscenity trial of Ferlinghetti for publishing Allen Ginsberg’s influential collection Howl and Other Poems. (wikipedia) 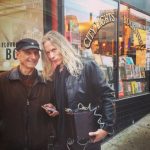 Around the corner from the former location of the Hot Dog Palace (a popular after-hours hangout back in the day, we’re told) we found an old record store (“101 Music – For All Faiths”)  – sadly we didn’t have time to fully explore the basement record bins, but we did find two vintage AudioArts Engineering parametric equalizers amongst a pile of dusty old outboard gear and without much hesitation acquired them for the LA studio (so I was carrying the two 1U rack mount units around from bar to bookstore for the entire afternoon – but it was worth it!). On this leg of the journey we were joined by my old friend Gary, who was one of our collaborators back in the days of the Boston studio (some history, as it turned out, we would soon be revisiting).

The work of Gary Snyder (not to be confused with our drummer, Gary Snider a.k.a G. Spider) reflects Buddhist spirituality and a love of nature (the latter not lacking in this neghborhood). Snyder met Allen Ginsberg, then, through Ginsberg, Snyder and Kerouac came to know each other. Snyder was the inspiration for the Kerouac’s character Japhy Ryder in The Dharma Bums.

Snyder moved to the Nevada City area long ago, so this town was an appropriate place to stop and ponder spirituality, natural philosophy, and cocktails when we were prevented by a snowstorm to go over the pass to Truckee.