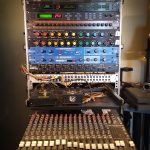 The first iteration of this dub rig was constructed in Boston, and was not surprisingly built primarily around the use of digital delays and feedback. This was with our buddy Jim (who developed his dub chops at the Western Front in Cambridge, MA and who we recently tracked down back in Boston, incidentally). Now the dub rig lives again in Amy’s capable hands and has been expanded to include some new effects and more filtering options. And more analog synths! END_OF_DOCUMENT_TOKEN_TO_BE_REPLACED 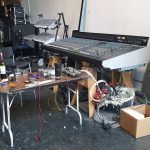 The console reassembly represents the biggest project, but there’s also the JUPITER-6 and JUNO-106, and the Kurzweil, among other pieces of fine old gear that haven’t been powered up in well over a decade. What’s going to happen? END_OF_DOCUMENT_TOKEN_TO_BE_REPLACED 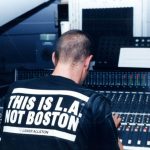 Let’s start this epic story at the very beginning. Years ago, there was a studio in Boston (Davis Square, Somerville, actually) that was built around a nice large-format Soundcraft TS-24 analog console. It also included a pretty respectable arsenal of analog synths and some classic outboard. About the time I moved to Los Angeles all this equipment went into storage, a process which included completely disassembling the desk. For years it all languished in a basement in New Hampshire … such a shame! But this year Amy and I decided to do something about it: a plan was hatched to fly to Boston, unearth all this gear, and bring it all back to LA where we could build out a proper old-school analog (as well as digital-hybrid, of course) studio, here at the Brewery.  END_OF_DOCUMENT_TOKEN_TO_BE_REPLACED